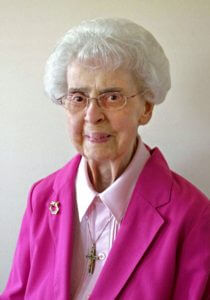 Sister Ursula Grimes, CSJ, 93, died Saturday, October 15, 2016, in her 76th year as a Sister of St. Joseph of Baden. The daughter of the late Patrick J. and Agnes Cain Grimes, Sister Ursula entered the Congregation from St. Titus Parish in Aliquippa, PA.

After earning a PhD in Administration and Supervision from the University of Notre Dame in 1961, Sister moved into several leadership positions within the Congregation, serving as Assistant Formation Director, Formation Director, and then Assistant Superior General from 1973-1983. In 1984, she began a 26-year ministry at St. Bernadette in Monroeville, including 18 years as Director of Family Life where she said she most treasured the opportunity to share the faith and the Gospel with adults becoming Catholics.

In recent years, she volunteered in the convent and reached out to others with a promise of prayers. Sister Ursula and her beloved older sister, Sister Mary Cordia Grimes, were constant, inseparable companions – always caring lovingly for each other. Known for her gentle, kind and gracious manner, Sister Ursula will be remembered, too, for her wise and compassionate leadership. While reflecting on her 75th Jubilee and the Congregation’s mission of union and reconciliation, Sister Ursula said, “Being forgiving is so important for people to work well together. It is part of who I am . . . and I hope that I have shared my love of being a Sister of St. Joseph with all those whom I have met.”

Make a donation in memory of Sister Ursula.