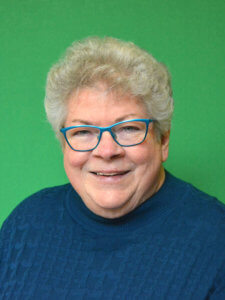 Sister Marguerite (Moya) Coyne, CSJ, 80, died January 14, 2021, in the 63rd year of her religious life as a Sister of St. Joseph. The daughter of Irish-born parents, Michael and Helen King Coyne, Sister Marguerite entered the Congregation from St. Bernard in Pittsburgh.

Following nine years as a teacher in the dioceses of Pittsburgh, Altoona-Johnstown, and Greensburg, Sister Marguerite served as principal at Our Lady of Victory in State College (1970-1978) and Ambridge Area Catholic in Ambridge (1978-1987).

For the next 16 years, Sister Marguerite worked in key leadership positions in the Diocese of Greensburg where she significantly improved schools and impacted the lives of students and families. In Greensburg, she served as Educational Consultant (1987-1990), Associate Director for Schools (1990-1993), Associate Superintendent of Schools (1993-1998), and Superintendent of Schools (1998-2003). As Superintendent of Schools, Sister Marguerite directed the regionalization of 15 schools, oversaw the budgets of 32 schools, and collaborated with teachers and administrators in developing elementary curricula that included pre-kindergarten. She also initiated a policy that directed diocesan funds to schools in neighborhoods of poverty.

Even in her leadership roles, Sister Marguerite maintained “a special bond of love and trust” with students who often affectionately called her “mom or grandma.” Following 42 years in education, Sister Marguerite was elected to the Congregation’s Leadership Team, serving from 2003-2013. She was an influential voice as co-chair of the Tri-Diocesan Sisters Leadership Conference, and as a board member of Jefferson Regional Medical Center, Sisters of Charity of Nazareth (Pittsburgh) and Mount Gallitzin Academy. Sister Marguerite helped lay the groundwork for the Sisters in Healthcare Exhibit at Slippery Rock University and Heinz History Center.

Known for her ability to listen and to laugh, Sister Marguerite has been described as a soft-spoken visionary who always led with compassion for others. Quick to offer prayers and encouraging words, Sister Marguerite credits her parents for instilling her with an appreciation of nature and compassion for the poor. Devoted to her family and the Congregation, Sister Marguerite described “points of beauty” in her life as “faces of loved ones and memories of Sisters.” She embraced music and poetry, and welcomed each day “as a new occasion for connection and love.”

The Sisters are grateful to Sister Jeanne Rodgers, longtime dear friend and caregiver of Sister Marguerite. A Memorial Mass will be scheduled at a later date. Donations in the name of Sister Marguerite may be sent to the Sisters of St. Joseph Memorial Fund, Development Office, 1020 State St., Baden, PA, 15005.

Make a donation in memory of Sister Marguerite.