The Sisters of St. Joseph and the Pennsylvania Historical & Museum Commission (PHMC) will dedicate a new state historical marker in Gallitzin, PA, to commemorate a nineteenth-century court case that allowed the Sisters to wear their religious habits while teaching in public schools. The dedication will take place at 11:30 a.m. on Wednesday, June 23, at Gallitzin Tunnels Park in Cambria County.

The 1894 court case of Hysong v Gallitzin School District was overturned the following year when the Pennsylvania Legislature approved the so-called “garb law,” which banned public school teachers from wearing religious attire and insignia. The court case, and resulting legislation, had a rippling effect across the country, inspiring 21 other states to enact similar regulations. The ban in Pennsylvania has endured. With Nebraska’s repeal in 2017, Pennsylvania is the last state where the ban remains in place. Recently, efforts have been made to repeal the law in Pennsylvania.

The historical marker designation is one of 24 announced by the PHMC in March 2020. There are nearly 2,300 of the gold-lettering-on-blue signs throughout Pennsylvania, chronicling what the PHMC describes as “the people, places and events that have affected the lives of Pennsylvanians over the centuries.” 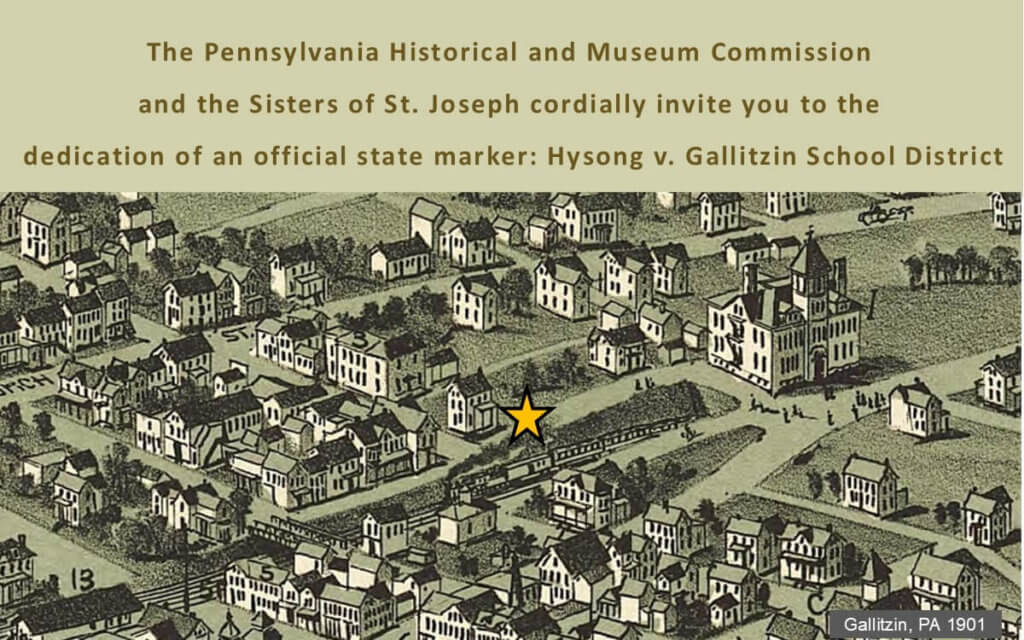 The site of the dedication is near the location of the former public-school building at Convent and Foster streets where six Sisters of St. Joseph taught from 1893 through the 1894-95 school term when their employment was no longer legal in the state.

“The Sisters of St. Joseph didn’t set out to make history. Since our founding in 1869 in nearby Ebensburg, we have been called to serve wherever needed, to respond to the urgent needs of the times,” said Sister Sharon Costello, CSJ, Congregational Moderator.

“We have remained faithful and committed to humbly serving God and every dear neighbor without distinction: from teaching public school students of Gallitzin more than a century ago to providing foster care to children, growing fresh produce for families, and engaging young adults in our social justice initiatives today.”